On Saturday night after class I was fortunate to visit Kazuo Ohno in his bed. He woke up when we came into his room, then dozed, then woke again while we were there. I held his beautiful hands and in my excitement blurted out many silly things . . . “honor to meet you. . . . waited for this moment for 12 years . . . thrilling to touch your lovely, expressive hands . . . so much admiration . . .  at this moment fulfilling the ultimate butoh dance . . . thankful to be a witness . . . fulfilling moment in my life . . . and so on.” I am sure he hears this all the time from so many admirers.  Meeting Kazuo Ohno, on his death bed was truly one of the top ten! END_OF_DOCUMENT_TOKEN_TO_BE_REPLACED

After teaching class, Yoshito, son of butoh founder Kazuo Ohno, often dances with a puppet of Kazuo, to the music of Elvis. It is really a treat!

On Saturday night we danced a requiem for Pina Bausch, avant garde German choreographer and dear friend of the Ohnos, who died on Friday June 26. We danced about strength and delicacy to “Amazing Grace” and “Ave Maria.” There were students from Brazil, Thailand, Israel, Japan and the US. It was quite powerful! 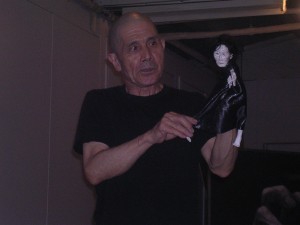 Kazuo has a generous and warm personality. Because he was in the first ankoku butoh performance when he was 14 he has been present for the entire history of the genre.  His classes are filled with quotes and stories about Hijikata and Kazuo. 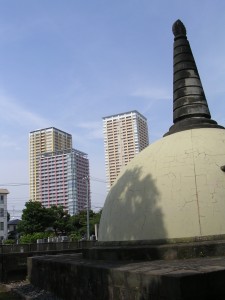 This district was one of the few in Tokyo to escape most of the destruction of the 1923 earthquake and WWII bombing. There are many old wooden houses, shops and temples. In addition, there is a lovely old cemetery and many Japanese style mansions. I had a lovely time getting lost in the warren of narrow streets.
The photo is taken from inside the cemetery with a view of Tokyo skyscrapers in the background. 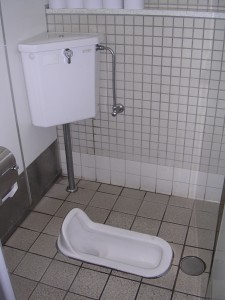 This may not be appropriate but who am I if not inappropriate.

I have experienced two types of toilets while here–the washiki and the washlet. The washiki is the traditional Japanese squat type toilet, named for the
position one assumes to use it, squatting down facing the hooded end of a usually porcelain trough. The washiki is considered more hygienic and wastes less water than a Western toilet, but using one can pose several problems–missing the trough altogether, splattering yourself or falling in the trough.

At the other extreme is the washlet which looks very much like a standard Western toilet. However the add-ons are positively Star Trek-esque. Washlets come with a heated seat, bidet with buttons for front or back spray, controls for temperature and jet power, as well as a dryer. There is also an “etiquette” button that provides flushing sounds to cover up any straining, groaning or splashing noises you may make.

What fun to use the bathroom in Japan! 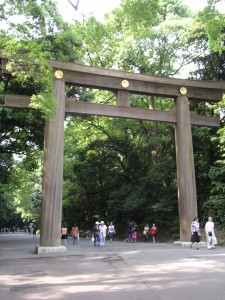 I have spent my first week in Japan and it has been filled with new adventures — learning how to master the train system, dancing with Natsu Nakajima, visiting musems, Shinto shrines and buddhist temples. I am enjoying a great deal of “ma,” a Japanese word that means both space and time. What a pleasure to have the leisure to dance, walk, read, write, eat or sleep at my convenience. Thank you NC Arts Council for this luxury.  I am learning to enjoy being lost or confused, to just wander and to not understand.

END_OF_DOCUMENT_TOKEN_TO_BE_REPLACED

I finally arrived in Japan after a 6-hour flight delay due to volcanic eruptions in Russia and Japan.  After a 2-hour train ride,  I arrived at my hotel in Yokohama. My room is very little and cute; I feel like a giant. The bathroom and kitchen are right across the hall and everything is clean and neat. I have internet in my room for free, so since I have lots of time on my hands, I will be able to keep up with email and ashevillebutoh posts. Tonight I will take a workshop with Yoshito Ohno here in Yokohama, if I can find the studio. On Monday I will take a workshop with Natsu Nakajima in Tokyo. I am most excited about these classes and will share more later.

I’ve got my new computer ordered and my packing is almost complete. I am trying to take as little as possible because I have to schlep it all.  Every day I learn something new about Japan or butoh. I am making friends on the internet as I research housing, workshops and travel I look forward to meeting them when I arrive.

Where: The Pavillion at Warren Wilson College

“Lifeblood” a collaborative duet with Julie Becton Gillum and Michael McCue will premiere.  The piece explores friendship and gender roles. A new piece, yet to be titled, will be performed by the WWC butoh class. In addition, the Modern Dance Technique class will perform a demonstration of the work they have accomplished this semester and Heather Sevcik will perform a piece inspired by her independent study “Affects of Sexual Abuse on Pregnancy, Birth and Mothering.”

I just received the 2008-09 NC Choreography Fellowship and will be going to Japan June 16 – September 15 to study butoh. At the present I am arranging housing.  I am planning to stay in Yokohama near Kazuo Ohno’s studio where I will be studying 3 days a week.  I have also been in touch with  Akaji Maru (director of Dairakudakan) and Semimaru (director of Sankai Juku) and plan to take their workshops in August.  Natsu Nakajima worked with Hijikata during the early years of butoh and is still an active force in the world of international butoh. I  have connected with her and arranged to study in Tokyo.

I am so excited and a little nervous about my impending visit to Japan. I know it will be a time of personal growth for me as an artist. Though I have been studying Japanese, the language is quite difficult; I am an old dog and it is hard to learn a new trick.