Threshold Embrace: a performance
by Vanessa Skantze and Tashi Dorji 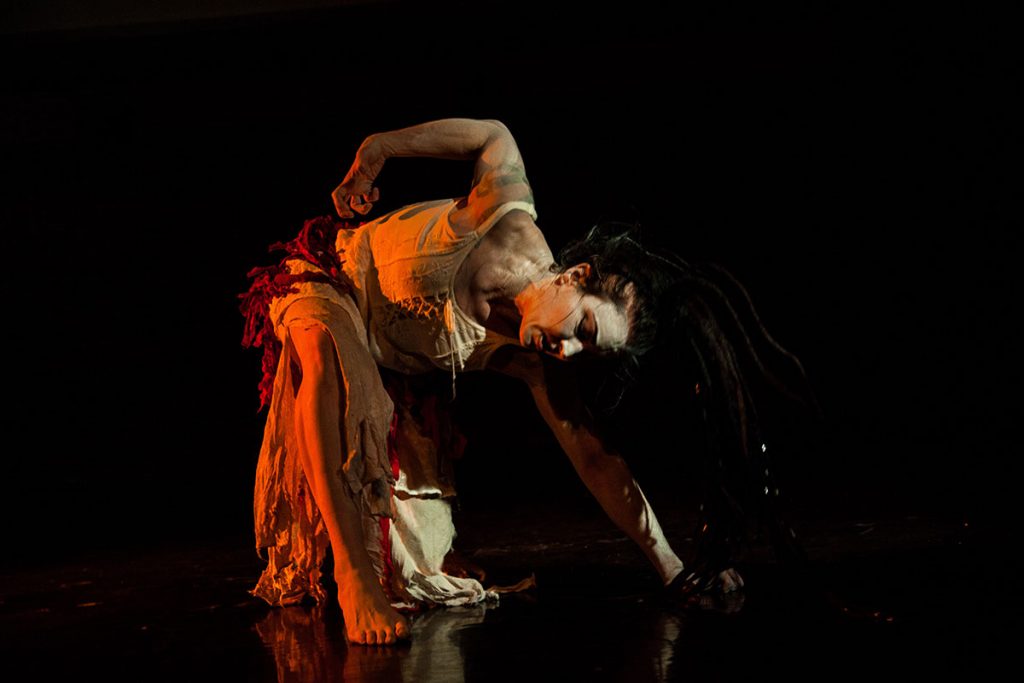 “To translate the invisible wind through the water it sculpts in passing”. (Robert Bresson)Awaken the body instrument with a Butoh dance workshop conducted by Vanessa Skantze. She will utilize myriad structural, energetic and visualization practices designed to deepen the awareness of the body as instrument. We will explore developing the interior realm of rhythm and vibration as a means of expanding the range of the instrument beyond image. A particular focus will be to develop strategies toward deep listening and improvisational work with sound artists; Vanessa is a seasoned improviser and considers this to be the central river of her dance performance work. Live music created by Elisa Faires will accompany the workshop.“Butoh is a corpse standing straight up in a desperate bid for life” (Tatsumi Hijikata)

—
Vanessa Skantze is a Butoh artist and teacher of yoga and dance from Seattle. She has performed in the U.S. and Europe for over 20 years. She co-founded New Orleans sound/movement ensemble Death Posture in 2002, and collaborates with many renowned musicians including Jarboe and percussionist Tatsuya Nakatani. Skantze has trained with Jinen Butoh founder Atsushi Takenouchi since 2003, and performed with him in the U.S. and Europe. Since coming to Seattle in 2004 she has created numerous ensemble works under the name Danse Perdue as well as solo pieces. In 2013 she taught as part of Lydia Lunch’s Post-Catastrophe Collaborative. In 2016 she was a movement director and performer for a production of Henry V with Freehold Engaged Theater, which tours correctional facilities in the Seattle area. She returned as movement director for the 2017 production of Hamlet; and is a teaching artist with Freehold in the women’s correctional facility. She is a co-founder of Teatro de la Psychomachia, a performance space in Seattle that hosts many local, national and international sound and movement artists.“The title reflects the space of the unknown that improvisation inhabits; also the deep listening, trust and communion that the individual performers are bringing to that space of convergence.”
(Vanessa Skantze)