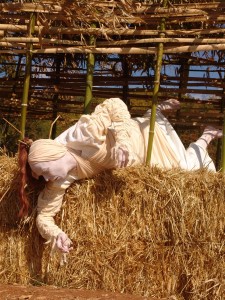 “Tunnel” for the 2008 River Sculpture Festival

Bio – Julie Becton Gillum: As founder of three modern dance companies and finally Legacy Butoh, Gillum has been creating, performing and teaching dance in the US, France, Cuba and Mexico for over 40 years. She currently teaches modern dance, musical theatre, performance art and butoh at Warren Wilson College. Gillum’s primary form of artistic expression has become butoh, which she has been practicing, performing and teaching since 1998. She has created and presented major pieces in the genre, at a variety of venues in New York, Chicago, San Francisco and Mexico. Gillum was awarded the 2008-09 NC Choreography Fellowship and intends to use the funds to go to Japan this summer to study butoh.

“Keng san-ku” (2003) A solo based on the Chinese myth of the goddess of the privy: During the seventeenth century, the second wife of a government official is murdered by the jealous first wife, who throws her into a privy pit on the Day of the Feast of Lanterns. Even today this holiday is celebrated by young wives in China throwing stick and cloth effigies of the Purple Lady into their toilets asking for her intimate womanly advice.
Performance History:

“Feather” (2005) an installation work based on birds and their humanlike behavior. Six Performances at the Wedge Gallery for the Asheville Fringe Festival.

“Alchemy” (2005) Structured on the Medieval symbolic process of alchemy, whose express purpose is to turn baser metals into gold, a metaphor for goodness of the human soul.
Performance history:

“Wound” (2006) This dance is based on the idea of physical as well as spiritual wounds.
Performance history:

“Ritual” (2006) This piece is created as a transformational blessing for the feminine.
Performance history:

“Quartet” (2006) This piece is based on ritualistic symbolism of the four elements: earth, air fire & water. Created and performed for the ‘06 River Sculpture Festival, Asheville, NC.

“Funeral for America” (2006) This dance explores the horrors of war.
Performance history:

“Butap . . . for my son John” (2006) Based on my relationship with my son, the piece explores both light and darkness found in maternal love.
Performance history:

“Arise” (2007) An exploration of ritual tattoo, this piece was created and performed in collaboration with tattoo artist Kitty Love at WWC. Score by Elisa Faires. (2 Performances, May).

“Pledge” (2007) An installation based on the pledge of allegiance, created and performed at the River Park Sculpture Festival with sound sculpture by composer Wayne Kirby.

“Bio . . .A Hazard” (2008) A ritual for the acceptance of death. The 10-year transformation I have experienced during the deterioration and reconstruction of my hip has given me insight into the prospect of aging and inevitably death. Score and video projections by Elisa Faires. Created and performed for the NC Dance Festival, Diana Wortham Theatre, 2/29/08.

“out there out here” (2008) A duet created in collaboration with John Crutchfield and Ron Bashford (director). Poetry by John Crutchfield, music by Wayne Kirby.
Performance History:

“Zombie Jesus” (2009) A scathing tribute to my mother, an avid supporter of PTL and founders Jim and Tammy Bakker. Music composed and performed by Marcus Chatfield, with Duke Ramuten accompaniing on harmonica, vocals, and preaching. (3 performances, Fringe Arts Festival, January).

“Moving The Women” (2009) An improvised performance for “Voicing BMC: The Women” an evening honoring the women writers, visual artists, dancers and musicians who were present at Black Mountain College (February).

“Lifeblood” (collaboration with Michael McCue), musical score by Elisa Faires. A piece that honors chosen roles as well as the care and feeding of relationships. (2 performances – May 12 , June 1)